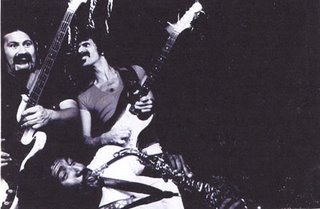 Had the best concert experience in a long while on Friday night, when I went to see the Grande Mothers at the Redcat Theater. Who are the Grande Mothers, you ask? Zappa alums Don Preston, Roy Estrada, and Napoleon Murphy Brock, plus Chris Garcia and Miroslav Tadic on drums and guitar, respectively.

The first set featured Preston, Estrada, and Brock performing Stravinsky's Histoire de Soldat with a killer chamber ensemble (featuring Dan Rosenboom, one of the esteemed members of my own group). The second set was a smorgasbord of Zappa tunes. The Stravinsky set was fun (in part because of the Mothers' bad acting), but the Zappa set, which I realized later went on for over an hour, seemed to fly by.

It was just beautiful to be able to hear this music (from the front row, no less) played in the spirit in which it was originally conceived, by some of the guys who were originally involved. And though it wasn't a flawless performance (it was the first of two nights), it had more balls and verve and energy (especially given that these guys are approaching geezerhood) than a lot of the newer music I've been hearing lately. Napoleon Murphy Brock is particularly amazing--there just seems to be no limit to his energy, and I don't think I ever got from the records how truly skilled he is as both a singer and a reed player. But Estrada too was a trip--what fun to hear that wacky falsetto of his live!

There is a tendency with posthumous performances of Zappa's music to err on the "prog rock" side of things--to go for the cleanness of the 80s groups as opposed to the rawer, sloppier sound of the Mothers. That's probably a good thing when it comes to the chamber or orchestral stuff (which was rarely well-performed in Zappa's lifetime), but in a rock or jazz context it's an approch that can be deadly. The Grande Mothers understand that even though Zappa never embraced rough musics like punk, he knew the value of musical rawness. And though the Redcat show clearly wasn't the sort of carnival experience that it probably would have been if Zappa had been involved, it was pretty damned close--which is good news for shmucks like me who never got to see the real McCoy when he was alive.
Posted by Andrew Durkin at 5:11 AM

I am trying to find Ray Collins, one of the originial Mothers of Invention and an old, dear boyfriend who I have not been in touch with for many years. Does anyone know how I can reach him either through email, phone or US post? I think he would be very happy to be back in touch after so many years. I tried to send an email to Don Preston and Roy Estrade (who may be currently in touch with Ray) but my emails bounced back when I tried to reach them at the Grande Mothers site. If anyone can email me with a way to reach Ray Collins, or if not, a way to reach roy or Don, I wold be most grateful.