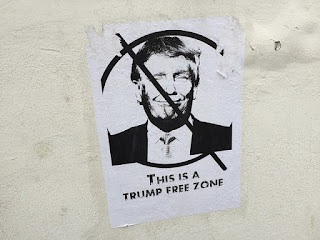 And so another presidential election is upon us. I really hope I get to vote for a Sanders-led ticket in November. I would do it wholeheartedly: I have loved that guy since he was a regular on Thom Hartmann’s radio show. I want him to win the nomination. He still might. I guess we’ll know more on Tuesday.
But this post isn’t about Sanders. It’s about what some progressives are threatening to do if he isn’t the nominee. It’s about an argument that goes back at least to 2000 (when it enticed me into voting for Nader, an act I will always regret), and is now resurfacing again. It’s about the “Bernie or Bust” movement, and this odd prose-poem by Michael E. Sparks (“Imagine that I have to vote for her just to keep the GOP out / I still struggle to do it / It’s like asking me to choose between death by burning or death by drowning / I choose neither / I would choose to vote for Jill Stein if it comes to that / At least then I could live with myself”), and especially these comments by Russ Belville:

Picking the lesser of two evils allows the evil to become more evil and entices the good to become less good . . .

If Donald Trump wins the presidency over Hillary Clinton, it’s not the fault of people like me who won’t vote for Republicans. It's the fault of the Democratic Party for nominating a Republican. For me, the horror of a four-year Trump term is less frightening than cementing in the Far Right / Center Right corporate duopoly in American politics created since Hillary's husband sold out Democratic principles on welfare, crime, race, labor, trade, drugs, and media.

Remember the tale of frogs in the pot of water? You turn the heat up slowly and they'll boil to death, but put them in an already boiling pot and they'll hop out. Donald Trump is the boiling pot and Hillary Clinton is the slow heat. A President Trump in 2016 equals a President Warren in 2020. A President Clinton in 2016 equals a re-elected Clinton in 2020 and the next milquetoast Obama-like speechifier in 2024 . . .
Belville’s take is the most disturbing to me. I call it the disaster gambit. The disaster is the election of the most egregious candidate, and the gambit is the idea that by passive-aggressively facilitating it, progressives will prompt a national anger so profound that we will finally have a revolution.
I suspect that disaster gambit thinking—whether explicitly articulated or not—informs much progressive rejection of Clinton. It’s a way of rationalizing away the consequences of a bad choice made under difficult circumstances. But it doesn’t change the fact that if Clinton really is the lesser of two evils, the lesser of two evils is still, by definition, less evil. Let’s be clear: those who embrace the disaster gambit are saying that they’re willing to contribute to an outcome that will cause more suffering for more people. And in order to justify that, presumably as collateral damage, one has to ignore the possibility that the imagined revolution may not happen, no matter how hot the pot of water gets. The truth is that a President Trump doesn’t guarantee a President Warren any more than a President Bush guaranteed a President Kucinich. And if the revolution doesn’t come, the suffering will have anyway.

* * * * *
The disaster gambit is especially problematic in this election, because it seems blind to the kind of disaster it is inviting. Numbed by a political discourse that has been eroding for decades, it overlooks the genuinely apocalyptic implications of a Trump presidency. It assumes the maintenance of a status quo such that there will be another election in 2020—at which time we can right whatever wrongs have been committed in the meantime.
With other Republicans, bad as they are, that assumption might at least have been reasonable. With Trump, it isn’t. The threat he presents is more historic.
For months now, Trump has been compared to Hitler, and—with apologies to Mike Godwin—for once, the comparison is not unwarranted. It’s not that Trump is sitting on a carefully thought-out program for world dominance and genocide. But there’s an American form of fascism lurking in him—something rougher, sloppier, more off-the-cuff. Trump is the ugly id of America; the distillation and amplification of everything that was merely worrisome about Sarah Palin; the return of the Republican repressed. His psychopathologies, on display for decades now, are quite breathtaking. He seems not to believe in a world outside his own head, or that it is populated with other people who have their own feelings and desires and aspirations and experiences. It’s as if, to him, we are all avatars in a video game, and he wants the cheat codes.
That’s pathetic, but it’s also urgent. Trump is mercurial and unthoughtful enough to take us past the point of no return before the end of a first term. As commander-in-chief, supreme court appointer, veto maker, bully-pulpit occupier, and wielder of executive orders, he will have no greater opportunity to perfect his violent, bullying brand of politics. By putting all that power in his hands, we will have opened up the possibility of something much worse than the politics-as-usual we have longed to escape. Environmental catastrophe. Race war. Nuclear deployment. Martial law. Internment camps.
Some of those outcomes may sound unlikely. But the point is that “it can’t happen here” is no longer a viable rejoinder to the problem of Trump. His candidacy has been a series of events that conventional wisdom did not anticipate. His words and actions, offhand and kooky as they may have seemed at first, have accumulated such that they now disqualify him from the benefit of our doubt.
The thing about American fascism is that it won’t happen until it does.

* * * * *
And what about Clinton? In its distaste for her—certainly understandable, even as it piggybacks a little too gleefully on a culture of misogyny, and condemns her a little too blithely for the sins of her husband—the disaster gambit presupposes politics in a vacuum. It fails to recognize that even a President Sanders would have to reckon with forces that Clinton has taken for granted her whole career—forces that have pulled every other Democratic president to the right since Reagan: Republican intransigence and irrationality, the anti-intellectual impact of corporate media, the depredations of capitalism, the aging of baby boomers, the spread of evangelical Christianity, the shortcomings of our educational system, and so on.
The disaster gambit misses the fact that influence works the other way, too. Indeed, Sanders’s unexpectedly and unprecedentedly strong showing in the primary means that a President Clinton will have to be impacted, to at least some degree, by the ideas Sanders is known for—just as President Obama was impacted by the ideas that Clinton was known for (health care reform, for instance). If she’s the quintessential of-the-system politician, that also makes her susceptible to pressure from the loudest voices—and (thankfully) there may be no voice louder than Sanders’s right now.
In any case, there’s a way in which supporters of the disaster gambit are flirting with the kind of glibness that composer Karlheinz Stockhausen displayed when he referred to 9/11 as a work of art: seeing the disaster only in terms of how it is most personally useful. I don’t doubt that their hearts are in the right place. The problem is that in politics it’s not enough to have your heart in the right place. Politics, as we have construed it and as we have to live with it, is inherently dirty, and it will be until that glorious day when we don’t need politics any more. Until then, we are all implicated in its results. If you are voting to make yourself feel good—if you start from the proposition that “it’s not my fault”—you have already misunderstood how this works.

One final thought: if Trump is the Republican candidate, and he not only loses in November, but loses resoundingly and dramatically, it could mean the repudiation and collapse of the Republican party as we know it. If he wins, thanks in part to the defection of Sanders-purists, then it certainly won’t.
Are we progressives really going to trade that opportunity for a long shot at utopia?
Posted by Andrew Durkin at 2:53 PM 2 comments: Links to this post