I know what you mean 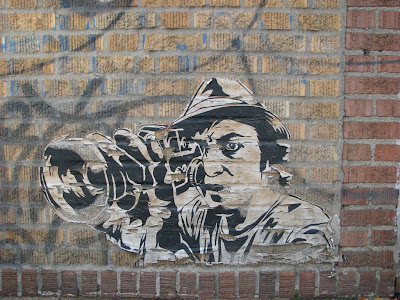 This post will end with a quote for the ages, taken from Exit Through the Gift Shop, a fascinating street art documentary.

If you don't know Exit, here's the Wikipedia summary:

Exit Through the Gift Shop: A Banksy Film is a film directed by Banksy that tells the story of Thierry Guetta, a French immigrant in Los Angeles, and his obsession with street art. The film charts Guetta's constant documenting of his every waking moment on film, from a chance encounter with his cousin, the artist Invader, to his introduction to a host of street artists with a focus on Shepard Fairey and Banksy, whose anonymity is preserved by obscuring his face and altering his voice, to Guetta's eventual fame as a street artist himself.

"Fame," in its most negative sense, is the key word here. Guetta, who through the course of the film becomes more and more unhinged, eventually succumbs to the temptation to make art. But as far as I can tell, it is all flash and nonsense, his work, all hipness unto death, without substance. (A key measure of Guetta's "success" as an artist is that Madonna asks him to design the cover for a "Greatest Hits" album. Of course she does.) "Artist," like "documentary filmmaker," or "clothing store owner" (the other things Guetta does in this film) seems like just another mask to try on. And frankly, it also seems like another way for Guetta to avoid his wife and three young kids.

Whatever. Some have speculated that the story of Guetta is an elaborate hoax, a joke by Banksy, but I dunno. I knew people like this when I lived in Los Angeles. It was hard to avoid them. If the film is a satire, its details are spot-on, and it is more depressing than funny.

Anyway, when Guetta finally succumbs to his artistic impulses, he puts together a huge exhibition, under the ridiculous moniker "Mr. Brainwash," and (surprise), the Los Angeles art cogniscenti fall for it, making his exhibition (the stupidly titled "Life is Beautiful") an instant hit. Banksy (the more interesting artist, though not immune to bombast himself) is left scratching his head, wondering how this ne'er-do-well could have ended up raking in millions of dollars simply by turning out tedious nonsense like this. Or at least that's the vibe I got toward the end of the film, when Banksy utters these words:

I used to encourage everyone I knew to make art.

I don't do that so much anymore.

Go watch, and let me know if you see his point.