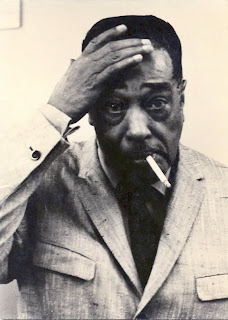 Is it me, or is this kind of an unusual photo of Ellington?

Writing a book is hard 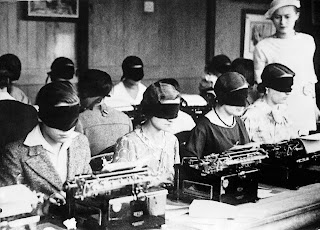 With blogging, at least, you don't have to plan for every contingency. You throw some opinion out into the ether, and if people disagree with it, they say so, and (wonder of wonders!) there is a "comment" function that allows you to engage in a discussion. (That is, it allows you to engage in a discussion when you're not too busy writing a book.) You can gradually tease out the nuances of the subject by posting variations on a theme. Everything is in flux, because, well, it's the Internet. Nothing is "permanent" (even though nothing ever really disappears). Sure, sometimes the responses and ensuing arguments can get a little mean-spirited and rough (though hardly ever on this particular blog, and I thank you for that). But there's a sense that all can be forgiven, amended, improved... because, again, it's the Internet. The whole thing almost has the dynamic of an "oral culture."

A book feels much more "cast iron," much more "this-text-will-represent-you-for-all-time." (It's not really either of those things, of course, but it sure feels as if it is.) It's easy to become obsessed with the futile task of anticipating every criticism (as if that is even possible), following through on every "but what if?" and every "on the other hand." It's one thing to spin that sort of stuff out in an actual conversation. But in a book? A real book? A book I want to be a knock-out, because it may be the only book I ever write? It's the most elaborate dance I've ever done.

Anyway, I'll leave you with this provocative observation from Christopher Small, one of the many writers whose work I am visiting and revisiting as I near the completion of this project. (It's a blog post! I can veer over to a new subject any time I want!) This bit is from his Music of the Common Tongue:

Thus the participants in a symphony concert are bringing into existence, for the duration of the performance, an ideal industrial society, in which each individual is solitary and autonomous, tidy, disciplined and stable, punctual and reliable, the division of labour is clear, the relationships are impersonal and functional, and the whole is under the control of a charismatic figure armed with clearly defined authority. The music played is drawn from a repertory which, like the ideal industrial culture, is standardized the whole world over and played in a standard manner; it is a repertory of musical works which themselves either celebrate the individualist values of western industrial culture or can be forced into that mould: it consists of abstract dramas of the individual soul through which performers and listeners alike can participate vicariously in the processes of becoming and overcoming, or else of abstract dances, many of them hijacked from more dancing cultures, in which the performance invites us implicitly to do what the concert-hall conventions prohibit us from doing, or else of abstract landscapes, of fantasy Espanas, Americas, Hebridean Islands or pastoral Englands of nostalgia or of the tourist imagination. Above all, it is a society in which producers and consumers of the commodity, music, fulfill clearly defined and separate roles. In the ceremony called a symphony concert, which brings this ideal society into existence, the values of performers and listeners, and their sense of who they are, are explored, affirmed and celebrated. It need hardly be said that, for those who do not share these values, neither the concert-hall ritual not the symphonic drama is likely to be of much interest.

I often wonder about the parallels between the symphony orchestra and the big band. (And how to avoid them.) But that's a subject that will have to wait for another post.

[photo credit: Foxtongue]
Posted by Andrew Durkin at 9:59 AM 8 comments: