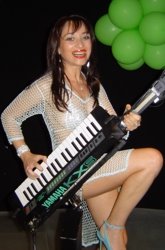 And it kills, too.

Thanks to David Adler for the link.
Posted by Andrew Durkin at 12:12 AM 4 comments:

NEW DELHI --Village elders ordered a Muslim man in eastern India to leave his wife after he accidentally divorced her in his sleep, a news report said Tuesday.

Aftab Ansari uttered the Urdu word for divorce, "talaq," three times in his sleep, prompting his worried wife to discuss the matter with her friends, according to the Press Trust of India news agency.

Under Islamic law, a husband need only say "I divorce you" three times to secure a permanent end to his marriage.

Muslim leaders in the couple's village in West Bengal state found out and decreed that Ansari's unconscious utterances constituted a divorce, PTI reported.

But 30-year-old Ansari said he had no intention of leaving his wife of 11 years.

"I have not given talaq. When I uttered talaq three times I had taken medicines to help me sleep," he was quoted as saying in the report.

The religious leaders said that before remarrying, the couple would have to be apart for at least 100 days and that the wife, Sohela, would also have to spend a night with another man and then be divorced by him.

PTI reported that the couple has been ostracized because of their refusal to abide by the decision of the village leaders.
Posted by Andrew Durkin at 4:57 PM No comments:

How to recognize an email scam

"If you choose to ignore our request, you leave us no choise but to temporaly suspend your account."
Posted by Andrew Durkin at 5:19 PM 1 comment:

Kris Tiner forwarded this to me this morning:

"In what is a not too subtle dig at Bush's subpoena of their search records, Google is getting their own nasty dig at 'W' before the gag orders go into effect. I don't know how long this will work [once the link is taken away you can find the relevant page here], but go to Google and type in the search word: asshole. Don't hit the 'search' button, hit the 'I'M FEELING LUCKY' button right below the Search."

How I hope the worm is finally getting off its collective apathetic backside and TURNING!

Another possible sign of positive change: Harper's Magazine is running a cover story advocating the impeachment of Bush. I saw the author, Lewis Lapham (also the currrent Harper's editor), on C-SPAN early this morning, and was pleased to note that at last a fairly mainstream publication is making this case rather forcefully.

I'm sure you've all noticed Bush's sinking numbers. It's actually a little frustrating that everyone is coming around so late in the game--there were those of us who understood even before 2003 that going into Iraq in this way was a horrible mistake. It may serve something like justice if Bush is actually impeached, but I suspect that would be cold comfort. The damage is already done. We need something that will undo it.
Posted by Andrew Durkin at 12:20 PM 2 comments: 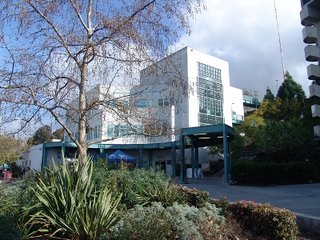 Woah. Can it be? Is San Diego actually becoming a hipper town than LA?

I know the latter's conservative reputation, and have experienced it directly in many of my non-musical trips to the region, but every time I bring the IJG into town, things seem to get better and better. Indeed, there seems to be a bona fide scene emerging. Exhibit A: our yearly pilgramages to Dizzy's, which have been less and less successfully promoted (compared with our first trip there, which got a major push from TV, radio, and newspapers), and more and more well-attended.

Exhibit B: yesterday, which took the cake. We played a single set for Mesa College's lunchtime Recital Hour series. There must have been more than a hundred people there, certainly a record for us. And even though thirty or so of them had to be (as students enrolled in the course attached to the series), the whole bunch was extremely enthusiastic. At one point (the little chorale section in "Fuck the Muck"), according to Mr. Schnelle, an elderly man seated off to the side actually cried, he was laughing so hard.

This little boost couldn't have come at a better time, I must say.

Major, major thanks to Bing Luu, Igor Korneitchouk, Jim Romeo, and Joe in the Mesa College music department for making this thing happen, and for getting the word out across campus. (Extra thanks to Jim and Igor for treating us to some killer Vietnamese food after the show.)

Here's to the next one!
Posted by Andrew Durkin at 12:46 PM No comments: 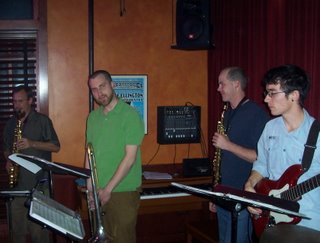 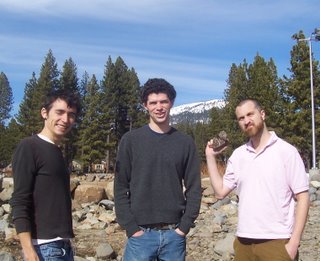 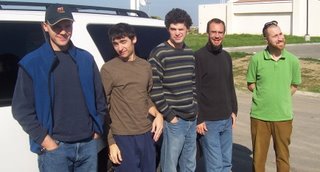 From the short Reno-area tour we did February 24-5. These pix feature the quintet only, as my camera crapped out before I could get any shots of the big group. Alas, someday I'll get my shit together.

(The bottom shot, L-R: Damon Zick (soprano), Oliver Newell (bass), Dan Schnelle (drums), Cory Wright (alto), Mike Richardson (bone). From there you should be able to figure out the rest.)
Posted by Andrew Durkin at 4:02 PM No comments:

An open letter to Barry Manilow 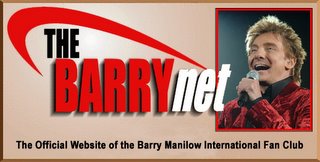 If your face is so fucking nipped and tucked and botoxed that you cannot ever ever change your expression even slightly, then you don't get to use the word "passion" in the title of your show.

Thanks for understanding,
Andrew

(Oh yeah, and while I'm at it, an open letter to PBS: what the fuck?! This is part of your mission to present the best of American culture?! This is how you use the public trust?! Are you fucking kidding me?!)
Posted by Andrew Durkin at 1:58 AM No comments:

If only "legendary" actually meant people came to the shows

More on our recent trip north, courtesy of Mel Shields at the Reno Bee (?):

"To call the Industrial Jazz Group 'eclectic' would be an understatement. Its legendary unpredictability means only the band members know what will be in store for the Carson City Brewery Arts concert Saturday."

Anyway, sorry for the blogging lull of late. I've been working through a series of problems with the CD manufacturers; I do believe it's all straightened out now and that I'll have discs in hand by our next gig (March 15 at Mesa College). I'll keep you posted...
Posted by Andrew Durkin at 7:29 PM No comments: