Just a reminder: I'll be chatting a bit with Vince Outlaw over at The New Jazz Thing on KSDS, this Thursday evening from 8;20-8:40 PM (just minutes before a 9 PM rehearsal for our December 3 show at Dizzy's). It should be fun. Vince, always one of our staunchest (and bravest) supporters, has been graciously spinning a few cuts from the upcoming album, so if you want to get a preview be sure to tune in. Or something like that...

BTW, I just discovered the Captain Beefheart tune "Kandy Korn," thanks to Liam at 8 Days in April. Now there's an overlooked Halloween classic if ever there was one...

But I guess we're past Halloween now, aren't we? That's right, it was just Thanksgiving, wasn't it? I guess Daphne, Thandie, and I hardly noticed, having moved into our new place two days before. Poor Simon (one of our cats) was so freaked by the move that the first thing he did when he got here was to hide in the fireplace. For a day and a half. He used to be gray and white. Now he's just gray. Maybe I'll post a picture soon...
Posted by Andrew Durkin at 1:34 AM No comments: Links to this post

You can't make this stuff up...

Maybe he should stick to malfeasance

Below is a stunningly bad (and disturbing) paragraph from Scooter Libby's 1996 novel, The Apprentice. (Yes, it's that Scooter Libby.) The narrative context is the training of a Japanese prostitute:

"The young samurai’s mother had the child sold to a brothel, where she swept the floors and oiled the men and watched the secret ways. At age ten the madam put the child in a cage with a bear trained to couple with young girls so the girls would be frigid and not fall in love with their patrons. They fed her through the bars and aroused the bear with a stick when it seemed to lose interest. Groups of men paid to watch. Like other girls who have been trained this way, she learned to handle many men in a single night and her skin turned a milky-white."

Get the fascinating, abominable story over at Tom Paine.
Posted by Andrew Durkin at 3:35 PM No comments: Links to this post 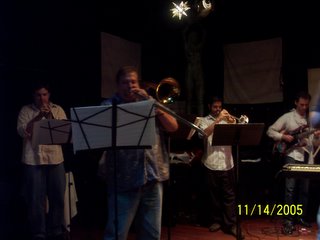 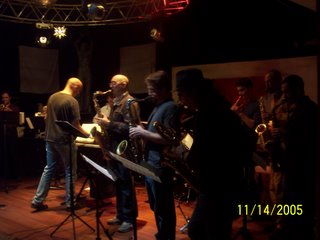 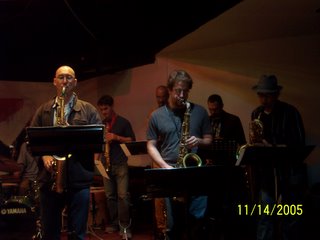 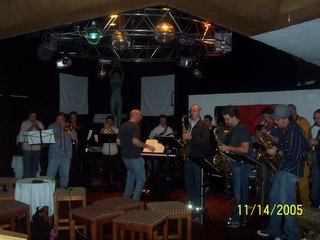 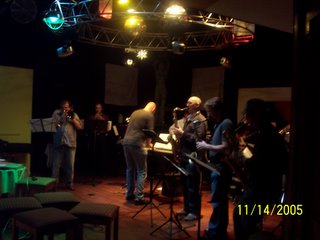 We're in the archive

The Internet Archive, that is. I just entered Industrialjazzwerke, vol. 1 into the IA database. (IJWerke was the album of outtakes, live recordings, and other miscellaneous stuff that I put together for fans of the group a year or two ago, as part of a fundraising effort. It's not an "official" IJG album, but it could have been if I had had a bit more money at the time.) I also entered a live recording of our 2005 show in Bound Brook, NJ (we appeared there during our June east coast tour). Somehow this live show (not our best, technically, but lots of fun because of the rambunctious crowd--a few of whom climbed onto the stage at one point). recorded by our good friends in the Cosmic Brotherhood of Ra, was input as part of IJWerke by mistake.

So I need to do some disentangling of files. In any case, lots of new IJG audio online.

Speaking of... to get a bit of a preview of the new album, check out the great Vince Outlaw's show, The New Jazz Thing Live, over at KSDS-FM in San Diego (the show airs Thursday evenings). Vince has been a big supporter of the IJG (and new jazz in general) over the past few years, and he's been gracious enough to start hyping our upcoming Dec 3 San Diego show (even though it's still November). To wit: he's already started playing some cuts from the new album (which actually isn't entirely done yet, but is very close).

In addition to being a great DJ, Vince is also a rare cat because of his interest in techhnology and its role in the continuation of jazz as an art form. Off the top of my head I can't think of many--or any--jazz DJs who share his enthusiasm for digital technology and the web. He's really pushing at the boundaries of this new medium, and he's one of the only people out there considering its implications for jazz. I for one say "bravo!"
Posted by Andrew Durkin at 1:27 AM No comments: Links to this post

Wow--as far as I know this is the first time another independent artist (or indeed anyone) has actually cited the IJG as an influence. Very flattering--many thanks, Hoppin' John.
Posted by Andrew Durkin at 11:37 PM No comments: Links to this post

...they just go here.
Posted by Andrew Durkin at 3:36 PM No comments: Links to this post

Though my "day job" requires that I spend a lot of time cavorting with academics, in general I prefer the company of musicians, since I think of myself fundamentally as a member of the latter group. I get depressed when the two areas merge, as they seem to do with a vengeance in this guy.

He seems to have interesting enough ideas, where one can make sense of them. But unless this is meant as an elaborate joke (entirely possible; this is the web, after all), he seems utterly detached from any possible audience. Try these paragraphs on for size:

"The underlying theory of polyradial or dislocutionary moves and countermoves could, in the opinion of several experimental physicists, form the point of departure for a unified field theory. The basis for this hypothesis are the so-called mytrons, a coaxial matrix of atomic particles whose assumed oscillitory invergence of minus 17 has been confirmed in a number of laboratory experiments. [...] Jerry Zachary Adamki has transposed this matrix onto the magnetic field line systogram of the earth developed by Myra Hodginson and Julius Sundbrunnen, whereby seven 'geosonar bijectives' were determined, i.e. points of interface between earth-immanent micro- and earth-constitutive macrostructure. At these geographical points Adamski will produce specific 'sound markings' on location."

Okay, so the presentation is a wee bit jargony. But then we get this:

"[...] with the help of the newest submarine recovery technology, Adamski will raise stones to the surface from an estimated ocean depth of 400 meters and bring them into sonic resonance. This costly endeavor is to be supported by funds from the Jennifer Manilow Foundation for the Promotion of New Music. The expenses incurred by a specially modified deep-sea crane and its crew are expected to amount to around 7,000 dollars per day."

Great. Abstruse and extravagant. Does that make it good art?
Posted by Andrew Durkin at 3:28 PM 2 comments: Links to this post

So you've probably already heard by now about the guy who wants to patent a storyline. You're also probably well aware of how utterly problematic that is. I know you are all smart people, after all.

But did you actually see the plot? Here it is, direct from the press release:

"The fictitious story, which Knight dubs “The Zombie Stare,” tells of an ambitious high school senior, consumed by anticipation of college admission, who prays one night to remain unconscious until receiving his MIT admissions letter. He consciously awakes 30 years later when he finally receives the letter, lost in the mail for so many years, and discovers that, to all external observers, he has lived an apparently normal life. He desperately seeks to regain 30 years’ worth of memories lost as an unconscious philosophical zombie."

Oooo! Sounds like a good one, huh?! Can't wait to see the movie.

Ahem. What I meant to say was: he's about as good a plot-deviser as he is a legal thinker. (Put another way, if that's the best he can come up with, then maybe we should just let him have it.)
Posted by Andrew Durkin at 1:24 PM No comments: Links to this post

Things to do tomorrow

1. Go to one of these. No president was ever more worth our contempt and scorn.

2. Listen to the mighty Perez Prado over at 8 Days in April. (Now there's a blog.) Click the link, scroll down and dig it. Mondo Mambo may be the first album I've enjoyed listening to repeatedly in, I don't know, a month or so.

3. Consider this flash demo of a new interface for the web. Pretty fucking cool.
Posted by Andrew Durkin at 10:46 PM No comments: Links to this post