The first Captain Beefheart song I ever heard was "I Love You, You Big Dummy," when I was about 16 or 17. Fred Frith was filling in as a guest DJ on WFMU one night, and I happened to record most of his broadcast to cassette (I did that sort of thing frequently -- it was one of the main ways I learned about new music). I got the sense that Frith really didn't want to play the track, except that he was getting a lot of requests for Beefheart, and wanted to get it out of the way. He accidentally started "Dummy" at the wrong speed (too slow), and I remember thinking that the music sounded even weirder after he corrected the problem halfway through.

I would eventually wear out that particular cassette, but I hardly remember any of the other artists Frith played that night.

Of course Trout Mask Replica is the classic Beefheart album. For me it preceded my Zappa infatuation. But I have always particularly adored Shiny Beast, especially "Tropical Hot Dog Night" (which kicks in at about 3:50 on the above clip). That song, for whatever reason, saved me from madness when I moved to LA in 1995. Coincidentally I played it for my elementary school band this year, and for a few minutes they seemed to understand what it meant to be overjoyed at the possibility of being utterly unique.

Beefheart seemed to have a Monk-like trust in the worthiness of the most basic aesthetic gesture. It's a cliche to cite the "child-like sensibility" of some artists, but with Beefheart it really was a key part of his appeal.

Did I say Monk? I could also have said Ornette Coleman. But I'd be better off citing Lester Bangs making that same comparison, more eloquently than I ever could (Bangs' review of Lick My Decals Off, Baby may still be the definitive essay on Beefheart, though it gets a little bombastic toward the end):

The comparison with Coleman is apt on more than one level: both ushered in new decades with conceptions of ensemble improvisation so unheard of as to raise wide controversy; both have concerned their music with the rising spirit of man, the unforced compassion and insight that led Coleman to write songs like "Lonely Woman" and "Beauty is a Rare Thing," Beefheart to "Frownland" and "I Love You, You Big Dummy"; and most significantly, no matter how far out both have gotten, the primitive American blues heritage has always been implicit in everything they've done.

All good points, though the "unforced compassion" is worth underscoring, particularly in relation to the basic sullen contrivance that seems to drive some of the indie-est rock (or jazz) today. People love Beefheart's music because it is affectionate, and it feels good, no matter how dark it gets:

. . . in an age of pervasive artistic negativism, we have in Cap a new-old man refusing to discard the heart and humanity and essential innocence that Western culture has at least pretended to cultivate for three thousand years and which our electrified, relativistic generation seems all too willing to scrap as irrelevant sentimental bullshit. When Cap beams: "My smile is stuck/I cannot go back to your frownland/My spirit's made up of the ocean/And the sky/And the sun and the moon/And all my eyes can see...Take my hand/And come with me/It is not too late for you/It is not too late for me...." he stands at a point of pristine enlightenment that acid can't confer.


I was going to say something about it being hard to imagine any of Beefheart's many imitators being able to convincingly deliver an opening line like "My smile is stuck / I cannot go back to your frownland" . . . and then I realized that Beefheart doesn't really have many imitators. Or, actually, any. 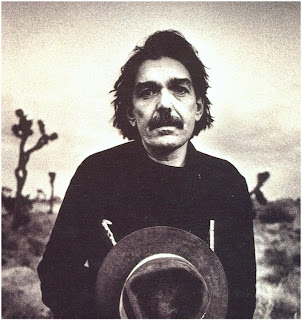 Posted by Andrew Durkin at 10:31 PM 4 comments: Links to this post