Say it ain't so 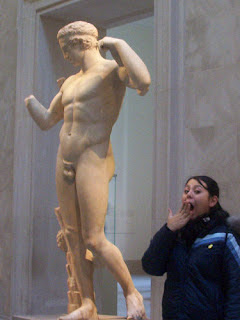 Well, I've got good news and I've got bad news.

The IJG tune "PDX LIX LAX" made it to the second round of judging at the fan-driven site Garageband.com. That's farther than any of our tunes have gotten on GB previously -- and with any luck, "PDX" is not finished yet. Cool!

Today we got the following review from a Garageband user (who shall remain nameless).

This is great for circus clowns or grade 'B' comedians. Can you play all of these notes again in the same sequence? Pretty good musicians but very poor composing on this piece. The discordant sections do not belong. The rest might due [sic] for a Disney soundtrack.

This fella also had the good sense to give "PDX" a "Stupidest Song I've Ever Heard" award.

I'm not going for a petulant frenzy here, I swear. Mostly I think the review is funny.

Okay, maybe it did piss me off just a wee little bit at first (I'm only human). But, honestly... mostly I think it's funny. What other response can I have?

One of the many interesting conversations I had with Evan Francis on the way down to LA from Oakland last March (pre-tour) was on the subject of the surprise we both feel when we come across people who are shocked by musical "noise" or "atonality" or "dissonance" (not that those are all strictly identical). It's easy for fools like us, who dabble in such things all the time, to forget that our choice to do so can actually still be "radical" or "offensive" to some people.

And maybe that's not as big a deal as it initially seems. I mean, it's all well and good for me to roll my eyes every time I hear the sort of smooth-jazz-and-funk-derived stuff that is kicking our ass on Garageband right now. But honestly, where would I (or folks like me) be without that consonant norm to buck up against? Of course, that works both ways. How else can insistently sweet stuff make "sense" (even to its most avid fans) except in the context of a sound-world that is constantly threatening to descend into harmonic strangeness?

So maybe I owe this reviewer a big thank you, because he got me thinking about one of my dear old favorite issues: perception.

For me, art is an expectations game. There's plenty of music I enjoy (and / or love) because it more or less fulfills a certain expectation -- it's like satisfying a craving for hummus. I've eaten hummus before, I know what it tastes like, and sometimes I just want to replicate that taste experience. There are subtle variations in the formula -- different brands, different flavors. But once you know what hummus tastes like, the pleasure of eating it doesn't come from surprise, per se.

Two other things. First: I only want so much hummus. And second: I can remember how much I enjoyed the first hummus I ever tasted.

In other words (dropping the food metaphor now), what really drives my listening, what keeps me constantly hunting down new bands and artists and composers, is not necessarily a desire to find more variations of the stuff I already know I like (that's more of a nice fringe benefit), but to re-experience the kind of astonishment I felt the first time I heard, say, "Struttin' With Some Barbecue." Astonishment, for me, is a weird combination of surprise, disorientation, and potential-for-growth, and it accompanies the discovery of something I don't immediately recognize, and something I don't immediately understand (I try not to confuse not understanding something with not liking it). It's easy to forget that astonishment is psychically important (the human nervous system ceases to perceive phenomena that do not change), and that love and astonishment are not the same thing.

Maybe true astonishment happens less and less as you get older, and maybe the quest for it is an idealistic pipe-dream. But for me, it's still the aesthetic bottom line. It's the thing to shoot for as an artist.

And, for what it's worth, your chances of being astonishing are probably inversely related to how reliably you can play "all of these notes again in the same sequence."

Reviews usually say more about the reviewer than they do about the subject being reviewed. In another of his reviews, your clueless critic says, "If I knew the names of some top jazz artists other than Kenny G. or Huge Groove then I would say that is who they sound like."

This guy wouldn't know real jazz if it jumped him in a back alley and gave him a rusty trombone.

If sequence is to imply also the same rhythm, John Cage clearly demonstrated the impossibility of "all of these notes again in the same sequence" decades ago by recording an expert performance and then trying to record the same expert performance on a second track; the two do not line up, they never will. If you duplicate one performance and copy it over, it matches perfectly and will jet-phase if you shift it slightly forward or back. Thus all human performances involve indeterminancy and improvisation; if you want repeatability, you have to listen to robots.

I don't know what era of Disney soundtrack he's referring to but I don't think it would be presumptuous to take that bit as a compliment.

I can only assume the Disney comment referred to this forthcoming work of art:
http://www.apple.com/trailers/disney/beverlyhillschihuahua/