The art of the fill 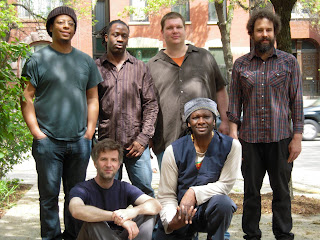 Speaking of drummers, the most recent Hamid Drake / Bindu album is truly fantastic, and highly-recommended.

I don't think I can improve upon this John Sharpe review -- summed up in the phrase "it's a joyous ride" -- but every time I go back to this recording (which is wonderfully played all around, and includes primo contributions from trombonist Jeff Albert) I find myself thinking about what drummers do, and more specifically about the art of the fill. Because while Sharpe is right when he says of Reggaeology that "[g]iven Drake's extensive reggae back story, it's no surprise that the riddims carry conviction" -- for me it's actually the small bursts of energy that Drake occasionally uses to supplement and adorn the groove that fascinate the most.

Now, I'm no drummer. (The best I can say is that for one summer in fifth grade, I almost became one. Okay, and I played drums on the first studio recording I ever made. Oh, alright: and I have a drum kit in my basement right now that I can't wait to rock out on.) And perhaps I spent too many of my formative years in the rock world, where some songs are actually defined (or even eclipsed) by their drum fills. Think Phil Collins's "In The Air Tonight," or Led Zeppelin's "D'Yer Mak'r," or dozens of others -- truthfully, some of these would be so-so recordings if we could somehow take away their signature moments of transitional percussive interplay.

But that doesn't make a good fill any less impressive. It's not like a drummer can play just anything (and have it sound good) at those pivotal sections of a given song. And if he or she plays the wrong thing, the music's forward motion can be greatly hampered, even destroyed. Plus, you have to be real selective: no one wants the composition to be saturated with end-of-the-bar noodling, lest things start to sound too busy and predictable.

So we're really talking about brief set of fleeting opportunities that must be recognized and responded to with authority and a sense of beauty. (How long is the average drum fill? A few seconds? How many distinctive fills can a five-minute tune handle? Four or five?)

Honestly, is that situation all that different from this one?

General Dodonna: Well, the Empire doesn't consider a small one-man fighter to be any threat, or they'd have a tighter defense. An analysis of the plans provided by Princess Leia has demonstrated a weakness in the battle station. But the approach will not be easy. You are required to maneuver straight down this trench and skim the surface to this point. The target area is only two meters wide. It's a small thermal exhaust port, right below the main port. The shaft leads directly to the reactor system. A precise hit will start a chain reaction which should destroy the station. Only a precise hit will set off a chain reaction. The shaft is ray-shielded, so you'll have to use proton torpedoes.

Wedge Antilles: That's impossible! Even for a computer.

Yes! And that's really the point here: on Reggaeology, Hamid Drake repeatedly does the impossible.
Posted by Andrew Durkin at 11:30 PM